Stars of the West End Along the Andalucian Coast

Lovers of West End and Broadway musicals are in for a treat in March when the popular “Stars Of The West End” return to the coast for a 6 date tour. An entertaining 2-hour show, featuring the most popular songs from the best loved musical theatre. Musicals like “The Phantom of the Opera”, “Mary Poppins”, “Oliver”, “Les Misérables”, “Wicked”, “West Side Story” and more can be seen in 6 venues from Torre del Mar to Gibraltar. 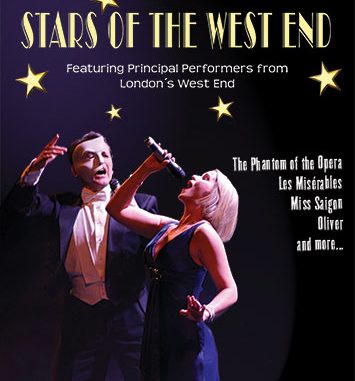 Appearing in “Stars of the West End” are 3 principal performers;

Mike Sterling – “The Phantom of the Opera” (over 1000 performances), and “Les Misérables”

Lucy Van Gasse – “Wicked” and “The Sound of Music”

They will be featuring songs from the shows they have appeared in, as well many other well-known numbers from other top musicals.

The tour dates and venues are;

All information about the venues and ticket prices can be found on the promoters website www.costadeldisco.com   and there is a hotline on 658579695