After having seen Mr. And Mrs. Cave Man have fun in making a home, resplendent with flowers and adornments, life took a huge leap forward, even after they died out. Mankind started getting together in tribes of like minded people and the effect of this was to make more ideas come along, a form of cross pollination. As these ideas started to flow, design was getting bigger and bigger and more complex. Beliefs of the spirit world, gave the people the idea to make wonderful designs on their own bodies and it happened in every corner of the world where people could be found. Some were more advanced than others, I would imagine due to the fact of interaction with other tribes, or isolation to a degree. Today it is estimated there are 150 million individual tribes worldwide, making around 40% of indigenous individuals, with each of those having its own design and culture 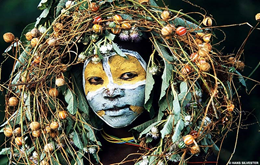 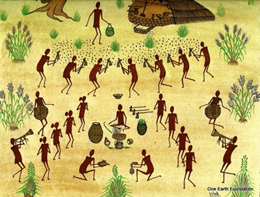 As the structure of tribes grew, so did their designs. They became more complicated and intricate. Now I am going to make a quantum leap as I have a lot of years to cover….

The Mesopotamians are generally credited with the rise of modern civilization even though they were an ancient one. A region of southwest Asia between the mighty Tigris and Euphrates, it was actually in modern day Iraq. Settled before 5000 BC, it was the area of many civilizations and people, the Sumer, Akkad, Babylonians and Assyria. Its demise came about when Genghis Khan swept down from Mongolia and destroyed its extensive irrigation system ca. AD 1258. How sad this is for us as it had beautiful paintings, homes, towns, music, arts… all gone. This is seen today with the wanton destruction of other priceless artefacts, temples and so on, by deluded bands of barbarians.

An Assyrian warrior, a head of a Nubian and the head of a King or Pharaoh

With the Romans, who were fighting tribes all over the place, came more order, discipline, feats of engineering and the home structure was much improved on. The Roman house was a house built for the peoples of southern Europe. So when the Romans built their houses in northern Italy or the northern European provinces, they invented a system of heating, circulating warm air under the floors and along the walls and improved yet again the design. The thought of how to utilize space was far beyond that of other civilisations that had come to pass. 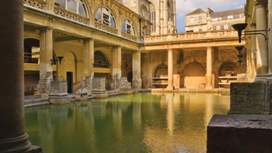 We use the idea of cooling or heating a space with water even today.

Around the same time, a wonderful civilization was in place in Ancient Egypt. They were fantastic artists, architects, scientists, farmers, sailors and a whole lot more. The parallels in these 2 civilizations in the Mediterranean gave spawn to other cultures. We all know of the beautiful structures built, Karnak, the Great Pyramids of Cheops, the frescoes, tombs with immense wealth. This will be gone into more depth with part 3.