Nobel laureate poet Vicente Aleixandre’s “city of paradise” will always be Málaga, the city of his childhood, but he is most known for the nearly six decades he spent writing poetry and meeting fellow writers of the Generation of 1927 in Velintonia 3, his Madrid home. Velintonia, a hispanized spelling of Wellington, sits on a quiet corner of Madrid’s university district on the renamed Vicente Aleixandre Street. The nearby metro stop, formerly known as Metropolitano, also bears the poet’s name. Now, 37 years after Aleixandre’s death, the three-story house sits vacant with a sign advertising its availability for 4.7 million euros.

As of July 2021, Velintonia’s future remains in jeopardy as the Association of Friends of Vicente Aleixandre (AAVA) eagerly awaits the classification of the house as a “Bien de interés cultural” (BIC) heritage site. Without legal protection as a BIC, Velintonia is in imminent danger of destruction if a developer purchases the property. While the AAVA’s efforts throughout its 26-year history have been far-reaching in Spain and internationally, no actions to save Velintonia have been made at any level of local or national government in Spain. 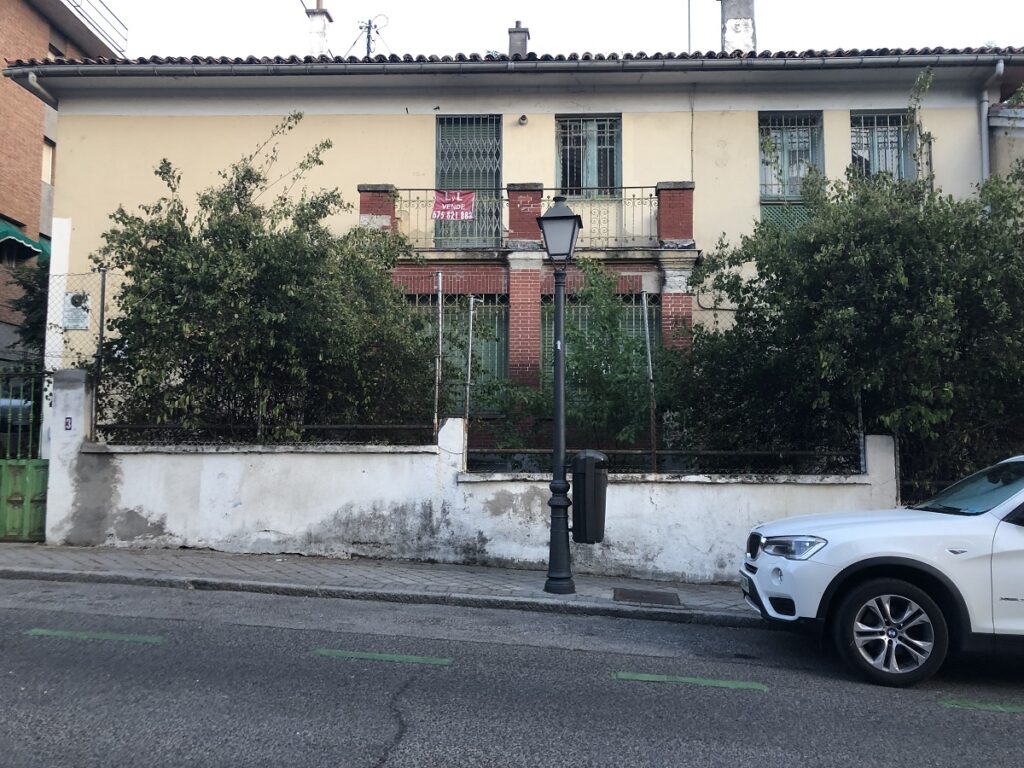 Recent activities have been cause for cautious optimism. In January 2021, José Manuel Rodríguez Uribes, Minister of Culture, visited the house alongside the president of the AAVA, Alejandro Sanz, and Aleixandre’s grandniece, Amaya Aleixandre de Artiñano. His tour of Velintonia, which has remained closed to the public since the mid 1980s, marked the first visit by a Minister of Culture since 1982 despite the AAVA’s many letters to the Ministry of Culture and other government entities.

On the steps outside of Velintonia, Uribes reaffirmed the significance of the house as a gathering place for members of the Generation of 1927. Generations of artists and intellectuals from across Spain and Latin America, from Federico García Lorca and Pablo Neruda to younger poets like Leopoldo Panero, would convene in Velintonia for poetry readings and conversation. Due to Aleixandre’s many ailments that kept him housebound, the large home and garden he shared with his sister Conchita became a way station for friends and international visitors alike.

Since 1995, the Association of Friends of Vicente Aleixandre has championed the cause to transform Velintonia into a dedicated house of poetry and documentation center. On July 7, 2021, the AAVA held a demonstration in the Puerta del Sol Plaza in Madrid to decry Velintonia’s continued lack of protection by the government of the Community of Madrid. The demonstration was, in part, a response to recent remarks made by the director of the Cultural Heritage of the Community of Madrid, Elena Hernando Gonzalo, on the “Por tres razones” program on Radio Nacional de España. During the program, she explained that Velintonia does not meet the criteria for legal classification as a BIC heritage site due to its lack of furniture and other original fixtures. However, Spanish law related to cultural patrimony deems a house or other structure a BIC if it is connected to significant historical events. The law itself does not make BIC status contingent upon the preservation of the house or continued presence of original belongings and furniture.

The deteriorating material state of the house has been a cause for concern since the passing of Vicente Aleixandre in 1984 at the age of 86. In the proceeding years, loiterers damaged some of the windows and entered the house, which is now armed with a security system. None of Aleixandre’s furniture or belongings are stored in Velintonia and many of the floorboards and other fixtures in the house are in great need of repair. Aleixandre’s personal archive was first inherited by his long time friend Carlos Bousoño and later went to Bousoño’s widow, Ruth Crespo, upon his passing in 2015. These letters, original drafts of his poems, and other documents are not accessible to members of the general public or the academic research community. A portion of his belongings are in the hands of his grandniece and other relatives from his mother’s side of the family. Most notably, is bedroom furniture is stored in the Biblioteca de la Generación del 27 archive at the Cultural Center of the Generation of 1927 in Málaga but none of the pieces have been on display. 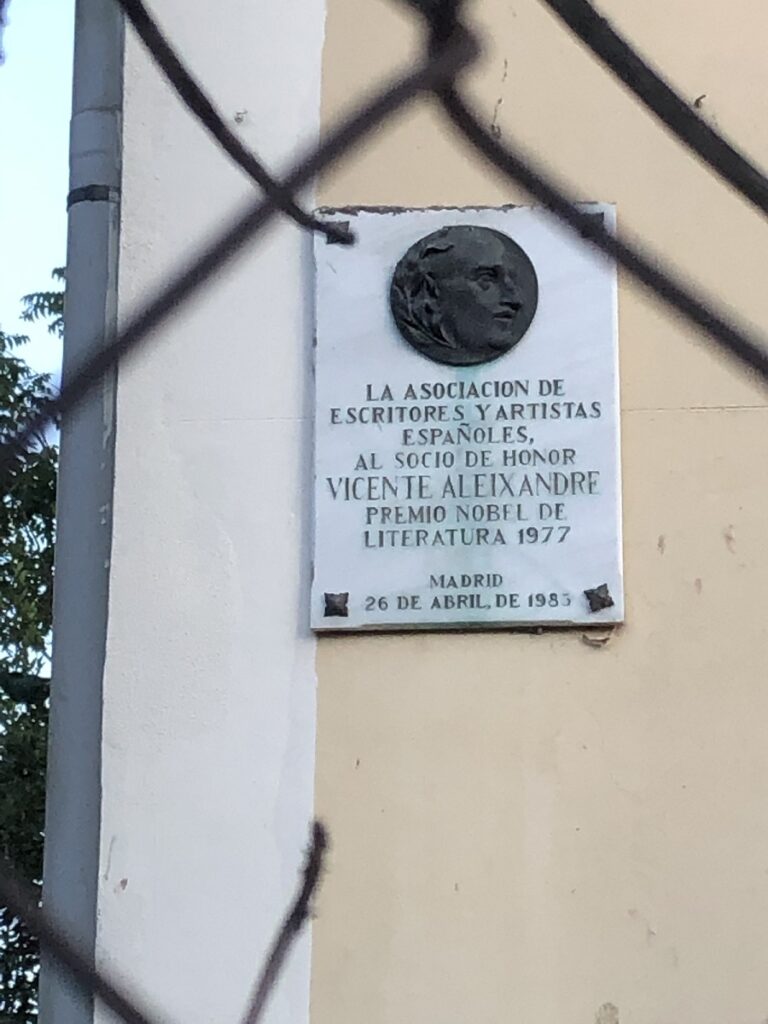 Even without the furniture and other literary memorabilia, members of the general public have convened in the garden at Velintonia each summer as part of the AAVA’s annual “Vuelve a Velintonia” event. During these events, participants spend an evening at the house to honour one of Aleixandre’s contemporaries. Past events have honoured Gerardo Diego, Federico García Lorca, and José Luis Cano. Over the past decade, visitors have been able to enjoy an evening full of poetry, musical accompaniment, and other acts of homage to Velintonia’s resident poet and twentieth century Madrid literary society.

Time has taken its toll on the house and the AAVA hopes to save Velintonia from destruction before it is too late. If Velintonia is classified as a “Bien de interés cultural” (BIC) heritage site, the AAVA has plans to revitalize the house as a museum in an effort to return it to its former role as a gathering place for artists and other visitors. In Spain and across Europe, there is a precedent of historically significant houses being converted into house museums, such as Lorca’s family vacation home in Granada and the home of Miguel Hernández in Orihuela, Alicante. In the case of Velintonia, the AAVA hopes to restore the home as a foundation in Aleixandre’s name to educate visitors on twentieth century Spanish poetry complete with a documentation centre to access digital records pertaining to these poets. They also plan to use the space for conferences and exhibitions about Aleixandre and his contemporaries of the Generation of 1927 to maintain the same level of openness and accessibility Aleixandre intended for his fellow poets during his lifetime. Until then, the AAVA’s activism and outreach efforts will continue to raise awareness about the state of the house and its fifty-year legacy as the centre of Madrid literary society.

More information about Velintonia and the Association of Friends of Vicente Aleixandre can be found in Spanish and English on their website: http://www.vicentealeixandre.es/

Angela Acosta is a Ph.D. Candidate in Iberian Studies at The Ohio State University. She has published an article about Vicente Aleixandre’s poetry collection Sombra del paraíso in the Mellon Mays Undergraduate Fellowship Journal with a forthcoming English translation of “Creatures In The Dawn” to appear in Metamorphoses. Her dissertation and current research bring attention to the legacies of writers of the Generation of 1927.